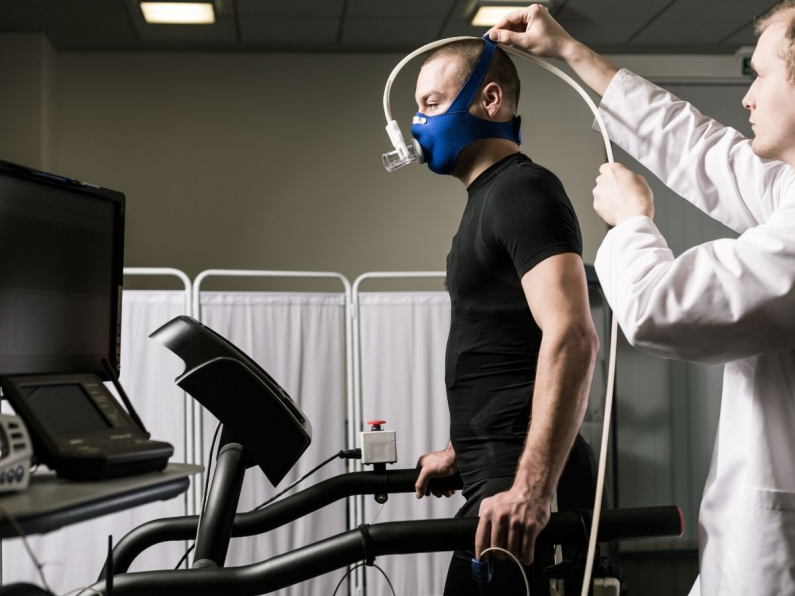 Aerobic exercises are activities in which the large muscles move in a rhythmic manner for a sustained time. Aerobic capacity is also known as maximum oxygen consumption (VO2Max). VO2 max is the maximum capacity of your client's body to transport oxygen and utilise it during exercise. A person's VO2 max is a good indicator of their physical fitness level.

Healthy aerobic capacity is linked to better heart and blood vessel health, mental health, enhanced brain function, academic performance and cognitive skills in children. It may even reduce the risk of neurological degeneration in adults prone to Alzheimer's. Lastly, improving aerobic capacity will affect exercise performance itself, both in aerobic and the anaerobic activities.

According to the American Heart Association, as much as 60% of American children lack a healthy level of aerobic capacity and cardiorespiratory fitness (CRF). Aerobic health is linked to better heart and blood vessel health, academic achievement, mental health and many other positive outcomes in young people. Since the 1980s, the trend has been down globally, with several associated health concerns, including obesity, among children lacking healthy CRF.

Young people with low or unhealthy CRF are higher risk for developing premature heart disease, type 2 diabetes and high blood pressure at younger ages. They are also at an increased risk for premature death from heart disease and stroke as adults. It's thought that a more sedentary childhood has contributed to the decline in aerobic capacity, with children electing not to go outside to play as much.

You can help children improve their aerobic capacity by supporting playing sports that include periods of vigorous physical activity such as basketball, soccer, tennis, swimming, among others that are effective in addressing aerobic capacity.

For the vast majority of adults, the benefits of aerobic activity far outweigh any potential risks. However, for deconditioned adults who leap straight into triathlons or marathons, there is a chance that they will put increased strain on their heart.

In triathlon accident reports, almost
40% of cardiac events occurred in first-time participants. This suggests inadequate training or underlying heart problems may be involved.

When training for improved aerobic capacity, especially to a competitive level, a slow and steady increase in training intensity is recommended.

Aerobic workouts can be a fun way for adults to socialise and improve their cardiovascular fitness. A recent study shows that high impact aerobic and Zumba Fitness
has a significant effect on improving VO2 max.

Completing CrossFit workouts regularly and competing in competitions also shows a great increase in the level of aerobic capacity as well as power and performance.

However, where fitness levels are low, and there are conditions like diabetes and high blood pressure already present, a low-impact aerobic dance exercise routine can be just as effective in improving aerobic capacity and thus improving the clients' condition.

If you work with the elderly, you'll know that their fitness goals will revolve around physical independence and quality of life, which includes memory function and not falling over. Research into healthy seniors, aged 60-88, noted that high-intensity exercise improved memory when compared with moderate-intensity training. In this study, the intensity of the exercise was critical. The participants who exercised using short, intense bursts of activity saw an improvement of up to 30% in their memory performance. In contrast, participants who worked out moderately saw no improvement, on average.

Intensity is relative and should be based on current fitness levels. You can help your client by advising them to add hills to walks or increase the speed of their walk over short distances. Also, while one study doesn't show much VO2 max improvement with moderate exercise, another may do and will offer other significant advantages too.

The benefits of exercise on brain health are further supported in adult populations which are at a higher risk of Alzheimer's because of a genetic disposition. In this sample, 26 weeks of aerobic exercise training improved the ability of their brains to metabolise glucose which positively impacted their metabolism and higher-order thinking abilities such as the ability to plan or solve puzzles. While also improving their aerobic capacity, there were extensive cognitive benefits. This study focused on moderate-intensity treadmill work, supervised by a personal trainer.

If you happen to specialise in training amateur, semi-pro or even pro athletes, understanding what their sport demands of them is imperative. As well as recognising that their aerobic capacity could be inhibiting their performance, especially if they compete in endurance sports.

Take, for example, marathon runners. They must be able to maintain running performance for hours and still have energy at the end to race if needed. A paper published in 2020 about the effects of marathon training on maximal aerobic capacity and running economy confirms that a specific marathon training program of 10 weeks had a significant impact on the VO2 max of highly trained marathon runners.

A unique example when it comes to aerobic capacity is professional dancers. The College at Brockport conducted a study on defining how much of their VO2 max dancers reach during rehearsals and stage performance. The result of the study is that there were significant differences in VO2 max during rehearsals and performance. They concluded that the rehearsals aren't sufficient to prepare a dancer for the demands of performance when it comes to aerobic capacity. Thus they need to engage in bouts of vigorous cardio exercise to ensure they will be able to cope on stage.

Increasing aerobic capacity is essential for general population clients to maintain physical health, for children to keep them active and support their development. It's also vital for the ageing population to improve their quality of life and keep them physically independent among other benefits, and crucial for athletes of all sports to keep progressing in their performance.

What type of workouts you choose to help your clients improve their aerobic capacity is up to you. As you could see from the research listed in this article, there are many ways to achieve that same goal. Whether that’s low impact and intensity aerobic exercise, moderate cardio work, medium to high intensity conditioning or a mixture of all the above, as long as it serves your client and their goal, you can’t go wrong.

How to Build a Training Program on Your Mobile Phone

Ready to join the family?

We'll get you up and running in no time. Start with our zero-risk free trial and build your personal training empire today.