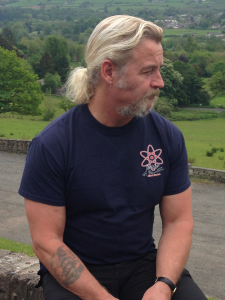 An Advanced Fitness and Personal Trainer who has also trained at the London School of Sports Massage, a Registered Exercise Professional (REPS) and Nordic Walking Master Trainer and Delivery Partner with Nordic Walking UK

Tug also worked with the London Ambulance Service as a Rapid Response Paramedic for 12 years, he is Mountain Unit Expedition Leader and PADI Rescue Diver who has also instructed within the armed forces in survival techniques.

Wicked!!So glad we came to Doublebois for the course, fun instructor and lovely surroundings, what more could we ask for (G&T perhaps). Thanks very much Tug, we look forward to returning in the not too distant future.RegardsMarie & Tom!!
E Mail sent out by Gill Stewart - Director of WALX - and Nordic Walking UK - this was at the time of the Corona Virus and e mailed to all NWUK DP's and members….

Today we are introducing a new presenter – TUG WILSON is a former Paramedic who was one of the first Delivery Partners when he was based in London and ran a great group with a huge focus on wellbeing and sociality. He and his Wife BiBi are now based in Cornwall where they offer a range of personal training and exercise solutions. TUG is also the inventor of the Lesu Paws and the TURTLE backpack. In these videos he is demonstrating the principles of BEAM FIT – Enjoy!

My Fitness Journey with Tug

Like many people my fitness journey began with my over 50 medical check-up, when the Dr informed me stop smoking and lose weight. The next day I started Couch 2 five key and threw the fags away.
Four months later I was regularly running 10k and cigarette free. Wanting to broaden my exercise horizons I joined a local gym, and it was there I first met Tug when I stumbled across his beam fit class. I was on my way to the toilet when I looked into a room and saw a group of women on their beams doing all sorts of weird movements. Out of curiosity I joined the class the next week and Tug introduced himself as the class guide not instructor. Thirty minutes later I was puffing and panting like I did on C25K. I think I had managed to stay on the beam for at most 5 minutes during the class. The next day I had aches in places I didn’t know I had places.
I became a beam fit regular, and quickly noticed improvements in my running and general fitness levels. I also noticed that class regulars often spoke to Tug about their aches and pains and he would give advice and help them with the odd stretch at the end of the class. One day I spoke to him about a back problem I was experiencing because of an old injury. He showed me some stretches, touched my back and suggested I might benefit from muscular therapy.
I had tried physio’s, osteopaths and chiropractors in the past so wasn’t all that hope full. At the end of my first MT sessions, when Tug didn’t even touch my back, but stretched the hell out of my hamstrings I felt much better.
I started regular MT sessions and began talking with Tug about my fitness goals, and a few months in shared that my friend had challenge me to run a half marathon with him in four months. “You can do that no problem” said Tug. A week later he gave me a half marathon training plan, with schedules of runs, stretches, and strength exercises. MT sessions also became full service coaching, nutrition hydration etc, etc, etc, advice sessions. A range of support provided at no extra cost, because for Tug the half marathon was a shared goal. I completed my first half marathon in 2.08, and immediately the goal was to break two hours. Three half marathons later goal achieved. I would have done it on the second half – marathon if two weeks before I hadn’t forgotten to put the insoles in to my running shoes and developed planter fasciitis.
Immediately the new goal became a marathon. Beam-Fit, muscular therapy and now personal training became the order of the day. Gasping for breath, after HITT sessions, mind blowing circuits and sessions on the rowing machine that had obviously been designed by Beelzebub, I was made ready for my first marathon. That is until two weeks before, when on my final 17 mile long run, I got a pain in my knee 500 meters from home. An emergency MT session the next day identified some IT band trouble. A strict regime of Rest Ice Compression and Elevation and lots of stretched seemed to do the trick, but Tug warned me my chances of competing were 50/50 at best.
Sixteen miles in and I felt the sand paper on the knee pain from the IT band start to kick in. An ice pack from the St Johns ambulance team helped a little but I was hobbling. Mile 20 I was limping along, and then the planter fasciitis start started, by mile 22 an ambulance man was telling me to stop, but I had £3000 pounds of cancer research sponsorship, so I kept moving with the help of the friend who had got me into this long distance running madness with his half marathon challenge. We quickly began to attract others among the walking injured and together we helped one another keep going. It took 5 hours but we made it.
The next morning I came down the stairs on my backside, and literally crawled into Tugs, for the most painful but relieving MT session ever. Two hours later I walked out.
A couple of years ago both Tug and I moved away from London, but his advice and support have always been at the end of a phone or WhattsApp message, until the Covid-19 lock down when he started his online classes. Now once again my wife looks at me when I’m sweating, panting and looking close to death, and says – “been working out with Tug have you”

Choose a client to message

Do you want this to be copied to the new client's account when a client is added to the group?